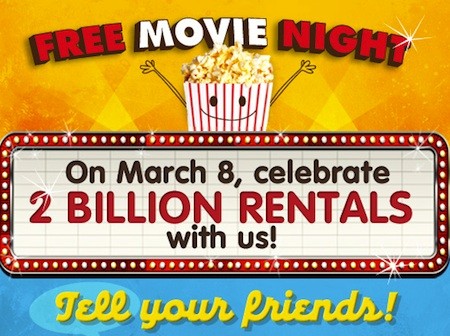 It took Redbox six years to hit the one billion rental mark, but only 18 months to double that. To celebrate, the Redbox kiosk company is going to share the love by giving everyone a free DVD rental (Blu-Ray and video game rentals will discount the DVD price).

Just use the Promo Code THANKS2U when checking out!

OAKBROOK TERRACE, IL, Mar 05, 2012 (MARKETWIRE via COMTEX) — Redbox achieved an entertainment milestone this weekend, crossing the two billion mark for movie and game rentals. The two billionth disc, Drive, was rented at a McDonald’s restaurant in Philomath, Ore. To thank America for making Redbox its destination for entertainment, Redbox invites everyone to enjoy a free, one-night movie rental on Thursday, March 8, by using a promotional code available on the Redbox® Facebook page.

“We’ve always known how much America loves easy, affordable entertainment, and today we can prove it two billion times over,” said Scott Di Valerio, chief financial officer of Coinstar, Inc. and interim president of Redbox. “Just 18 months ago, we rented our one billionth DVD and we couldn’t be more excited to celebrate this remarkable second rental milestone with our customers.”

Consumers can join in the celebration by visiting the Redbox Facebook page to share a promo code for a free, one-night DVD rental with friends and family. The promo code is valid on March 8 only. New-release titles now available include Hugo and In Time. Starting tomorrow, Footloose, Jack & Jill and Like Crazy will be available at kiosks nationwide.

Redbox is located where America shops with more than 35,400 kiosks nationwide across 29,000 convenient locations. Today, more than 68 percent of the U.S. population lives within a five minute drive of a Redbox kiosk. Finding the nearest Redbox location is simple on redbox.com, via the Redbox iPhone® and Android™ apps or by texting FIND to 727272.*